Well folks, the next Assassin’s Creed has been rumored to be a Viking-themed adventure for some time now, but it’s finally official! You all may remember that tease in The Division 2 that pretty much confirmed it, but now we have official word on Assassin’s Creed: Valhalla!

Check out the trailer below, and all the first details on this next generation chapter of Assassin’s Creed!

Firstly, let’s get that trailer in here, shall we?

It seems to be a CGI trailer, but hey, we still haven’t seen what kind of graphics the PS5 is capable of, just saying. The trailer itself is classic Ubisoft with awesome music and an eye for stunning cinematography.

Interestingly, the narration comes from England, who see the Vikings as a scourge on the land. As they describe them, however, the actions we see in the trailer show them in a different light. A very cool way to look at how propaganda distorts the personality of those it targets.

Of course it gets violent towards the end. There’s a moment where the protagonist in the trailer also spots a figure in a hooded robe and claims that “Odin is with us!”

I’ll be honest, I saw the beard and thought it was Ezio, but that wouldn’t make any sense of course. Still, a man can dream right!? The finale of the trailer was superb as well, with a reveal of the hidden blade as a striking moment that solidifies this as an Assassin’s Creed game.

We also know from Ubisoft that you’ll play as Eivor (it’s pronounced like AYY-vor), who can be a man or woman based on your preference. Nice to see that option again.

You will lead your clan into battle against England in what Ubisoft describes as “more action-packed and brutal than anything Assassin’s Creed has seen before.”

The release date is currently the 2020 “holiday season,” and it has been confirmed that we will see Assassin’s Creed: Valhalla on Xbox One, PS4, PC, Google Stadia, Xbox Series X, and of course the PS5.

Read on to check out all the details behind the game’s creative and artistic reveal!

One of The More Creative Reveals

The reveal happened over the course of eight hours today on a stream where artist BossLogic drew the image you seen above in real-time.

Ubisoft is known for being creative in their marketing. Just look at the intro to any one of their E3 showcases to see that. Even so, I’ve never seen a reveal done via digital painting, but I gotta say, I like the idea!

For those without eight hours to spare (seriously, you’re in lockdown, what’s you excuse?), here is a time-lapse of the process via Ubisoft’s YouTube channel:

While we don’t know much else currently, it’s safe to say that this new iteration of the series will most likely release on PS4 and PS5, much like Assassin’s Creed IV: Black Flag was a title for both systems (and a PS4 launch title).

I would be totally fine with that. But, here’s hoping I can muster up the ability to wait for the next-gen version. I don’t know, I’m a big AC fan, so if there’s a gap between the PS4 and PS5 versions, I just may have to double-dip.

As more information develops, stay tuned to this page for all the latest information on Assassin’s Creed Valhalla! 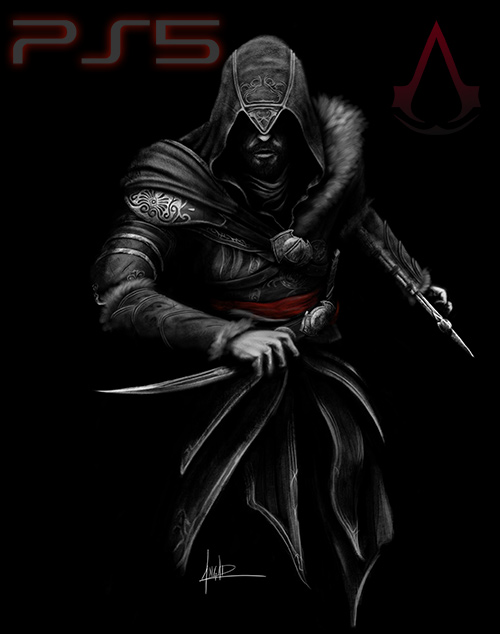 In the meantime, stay safe, fellow gamers, and keep this page bookmarked for the latest info!