As someone who knew they wanted to be a writer at a very young age, I grew up on stories in all of their forms. Books, movies, TV shows, and especially video games. It’s why I’ll dabble in some multiplayer from time-to-time, but you’ll always find me hunting down that next great story. Haven, out now on PS5, is a game that immediately grabbed my attention.

Two lovers, on the run from their past life, find themselves crash-landed on an alien planet with nothing but themselves to keep each other company.] Love is an easy emotion to replicate, but capturing it is something else entirely. Let’s find out how these literal star-crossed lovers navigate the perils of both survival and a budding relationship.

Haven takes place on an alien planet called Source, where two lovers by the names of Yu and Kay have managed to escape and survive a crash landing in their ship. Instead of focusing on how their relationship began, the game begins after they’ve been together for some time.

Thanks to excellent writing, the player doesn’t feel like a third wheel in this relationship. Their struggle is relatable, and even if their relationship begins in a classic “honeymoon phase,” it’s believable and endearing from the beginning.

They joke, they argue, they laugh, they cry. It’s a science fiction world, but the struggles Yu and Kay face feel all too real. As someone in a relationship for the long haul, I found bits of myself and my partner in both of them, which helped me become attached to these characters early on in the adventure.

Speaking of real-life relationships, you can play Haven single player, controlling both Yu and Kay, or you can have someone join in local co-op. Given the romantic nature of the story, I imagine it would be awkward playing with a friend, but if you have a Player 2 in your life, it’s easily the best way to experience this game.

Story developments happen around the world, but the most intimate moments occur in the Nest, which is your ship and home base. Here you’ll talk, sleep, cook, shower, and heal yourself between excursions into the world.

While the game is never explicit in its more romantic moments, it’s not afraid to let its characters express their love. Again, maybe not the best experience for a group of friends, but the authenticity of the relationship comes through in these very human moments.

Yu and Kay’s relationship isn’t wholly passive either. You’ll need to choose dialogue options for each of them, or have the other player decide their responses. You can choose to play them however you like, but certain choices will boost their confidence and improve the relationship dynamic, but like any relationship, there are going to be arguments, which can be interesting to navigate in both single player and co-op.

Not only will you need to decided the dialogue choices for each character, but you’ll also leverage their skills in combat, which is far beyond the turn-based system I expected from screenshots and trailers.

Combat is indeed the highlight the experience in Haven as it demands the most from the player, though difficulties are available if you prefer. Whether you’re playing in single player or local co-op, combat plays out in real time, requiring you to analyze enemies before deploying things like a ranged attack, a melee attack, or your shield.

Enemies in the game are infected by a substance referred to as Rust, which can be dissipated using your own energy source, Flow, which is the basis for your attacks. Even in the beginning, the combat demands attention, as you can block with one character and attack with another, but the blocking character will throw themselves in front of the other to absorb the damage.

Some enemies require you both to attack simultaneously, and other additions to combat as the game progresses further require you to plan before you act to keep both players in good health.

I leave exploration for last in my gameplay review section because it has the least depth out of everything. As you glide about the world using Flow-powered boots, there’s a excellent sense of wonder and discovery, but your actual activities are limited to gathering ingredients and collecting shards of rust to cleanse the various floating islands in the world.

Furthermore, the layout of certain islands requires you to wander around until you find the path forward via Flow bridges. I will say that collecting flow through a process of following bright blue lines in the world to their end is an exciting way to leverage the movement mechanics.

Yu and Kay’s relationship also comes through in subtle ways as you explore. Whether it’s them hugging each other as an idle animation, or holding hands as they glide across the neon grass, you feel their love for each other even outside of scripted sequences.

Shortly into the game you also get a map, which I welcomed because I had already gotten lost a few times, which the in-game characters joked about. The map isn’t very detailed and only shows the connections between islets, offering slightly more detail based on the character’s entries.

Between combat, you can cook various recipes at the Nest or at camps you can find in the world, but this is just a simple mechanic of adding ingredients together and enjoying the outcome. There is some nuance here, as cooking your partner’s favorite dish helps strengthen your bond, which doubles as your “level” in RPG terms.

Despite some of the gameplay mechanics feeling a little shallow, there’s no denying the serenity of the game’s quiet exploration. The combination of different mechanics also helps keep things from becoming too repetitive, and the story itself is bolstered by excellent writing and voice acting to keep you engaged throughout.

Love May be Blind, But This Game is Gorgeous 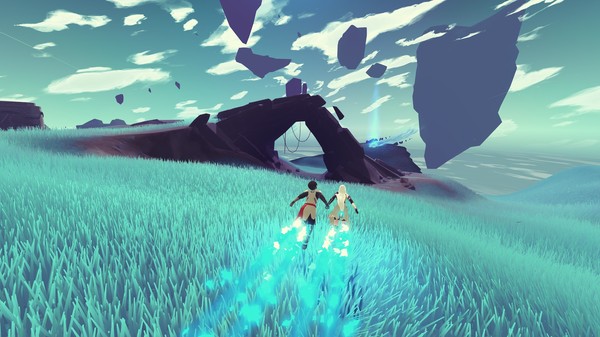 A believable relationship and a nice mix of game mechanics is the foundation of Haven on PS5, but it’s the visuals and soundtrack that truly solidify the experience. The opening cinematic, which is a tremendous display of watercolor style and superb electronic music, sets the stage for a game that is just as much fun to watch and listen to as it is to play.

The bright and vibrant color palette, along with the sharp and detailed character portraits during dialogue absolutely explode off the screen in 4K with HDR on PS5. Both Quality and Performance modes are included as well, but given the sheer beauty of it all I opted for quality to maximize the image quality.

The soundtrack deserves special note as it truly breathes live into the environments and the story. Composed by DANGER, it’s tracks are filled with toe-tapping electronic beats, subtle ambient songs of reflection, and rousing rhythms that instill both intrigue and wonder.

It’s rare for a game to dive headfirst into something as messy and complicated as love, while also seeking to provide a fulfilling experience for the player. The inclusion of local co-op is a brilliant move that makes this a perfect game for couples. Like any relationship, it has its highs and lows, but just like love itself, those highs make it all worthwhile.

A copy of Haven was provided to PS5 Gamers for review purposes.