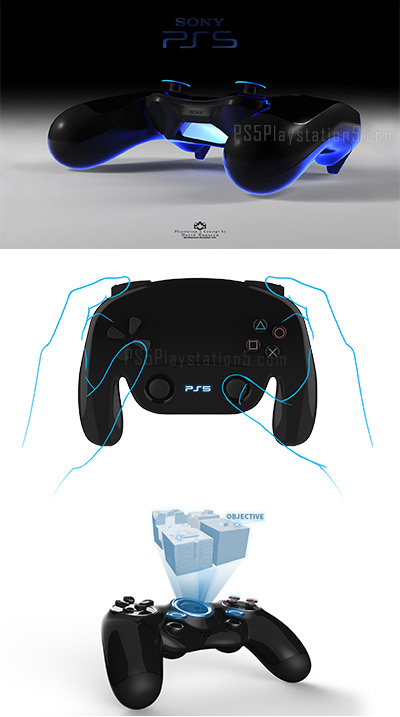 Controllers are the tools by which we interact with our games. Their design and function is just as important as the console itself. A great console with a bad controller will always be remembered as a bad console. Thankfully, Sony has never had too much trouble with their controller design.

The original DualShock began life as a secondary controller for the PS1, and until the PS4, it remained largely the same. The DualShock 4 mixed things up, so will the PS5’s controller continue this trend? Let’s talk about what we, as gamers, want from the next PlayStation controller.

The PS4 has been absolutely killing it this generation. It came out of the gate with plenty of features Sony knew gamers and developers wanted. Was it perfect? No, but it certainly started on a better foot than the Xbox One did.

Sony has always had their finger on the pulse of the gaming industry. It was a bold move to change the controller design for the DualShock 4, and it mostly paid off. I personally like the PS4 controller better than past iterations, but it’s not perfect. So, how can Sony improve with the Dualshock 5? Here are 7 things gamers will be happy to see as part of the PS5’s controller setup:

7 Things Gamers Want to See From The DualShock 5

1. Touchscreen Instead of a Touchpad

The addition of a touchpad on the DualShock 4 was an interesting change that makes it stand out from the DualShock 3 in a big way. While this touchpad works well, it hasn’t received a lot of use on the console since launch. Underutilized space?

It acts as a separate button you can press (often to open maps in games), but the actual touch tracking has only been used sparingly. It feels like it should have been something more useful, like a touchscreen.

The Wii U had a touchscreen on its controller, and so did the Sega Dreamcast. Both of these consoles didn’t realize their full potential, but they did have interesting mechanics with the touchscreen.

Information like health, inventory, and even maps could be displayed here and prove far more useful than a touchpad that rarely sees any use.

One thing that Microsoft has done very well this generation, is offer a custom design option for people who want a unique controller. Microsoft’s Xbox Design Lab is an intuitive online platform that lets you create a custom controller with a huge variety of options.

You can change the color of the front and back faceplates, along with the color of the buttons, the triggers, the bumpers, and even the analog sticks. If you want an engraving, you can have that too.

Sony has released a good amount of color options for the DualShock 4, but I would love to see a platform like Design Lab for the DualShock 5. Sony could even take it one step further and allow gamers to place emblems on the controller. Wouldn’t it be amazing to have the logo of your favorite game franchise or sports team on your controller?

Options like these could really give Sony an edge in terms of customization. Gamers are continuing to value unique controller designs and colors, so it’s a move that makes a lot of sense.

The DualShock 4 doesn’t have a great battery life. This is partially due to the light bar, which we’ll talk about momentarily. Having a light on the entire time you’re playing is a major drain. I personally have two controllers and a charging dock so I can always swap out one for the other when they die unexpectedly.

It’s not ideal, so one thing we all want from the DualShock 5 is longer play times before we have to stop and charge. I would also like to suggest that we ditch the cords. Wireless charging is still young, but it’s moving forward at a fast clip.

We could have a charging pad similar to what smartphones use today, but upcoming technology is poised to use radio frequencies to deliver power in a field, much in the way that Wi-Fi delivers internet wirelessly.

If your controller is within this field, it can automatically charge itself without any need for cables. Now, I’m not sure I love the idea of bathing in an electromagnetic field, but odds are I already do it in my tech-heavy home.

In either case, the option for wireless charging could help deter complaints about battery life in case Sony decides it’s not worth it or possible to upgrade the battery in the DualShock 5.

Analog sticks get a lot of wear and tear. While this hasn’t been a huge issue in the past, the textured rubber grips on the DualShock 4 are notorious for ripping and tearing pretty quickly. Whether it’s the material, or the shape, the DualShock 5 needs to change the sticks.

It’s a simple change, but it opens up opportunities for Sony to elevate their analog stick design in the process. They could change the texture again for better grip or elevate them for more accuracy.

In another scenario, they could remove the analog sticks all together and opt for touch pads similar to what Valve did with their Steam Controller. This would be a big surprise, so it doesn’t seem as likely. If Sony did make this huge change, they would need to quickly show that these pads could function just as well as analog sticks.

The DualShock 5 can rise above the PS4s controller by offering a more modular design. People often complain about the DS4’s buttons sticking, or the triggers breaking. How nice would it be if we could just pop those off and replace or clean them? People have taken apart the DualShock 4 for this purpose, but it’s not something the average gamer could or would want to do.

If Sony were to make this a feature, it could extend the lifespan of our controllers and justify a potential price increase for the DualShock 5, which would benefit everyone. A big surprise here, would be if Sony decided to make the DualShock 5 open source.

Again, this would be taking after Valve’s approach to their Steam Controller, but if they choose a modular open source design it could open up countless doors for innovations. This would make the DualShock 5 the perfect controller, after people are able to create and modify it. Still, such a choice would be a bold move on Sony’s part, so it’s not entirely realistic.

A modular design alone would help with parts that need to be replaced after wear and tear takes their toll.

It’s time to talk about the lightbar. This light is always on while you’re using the DualShock 4. It does have an option to dim the light in the system settings, but this still drains the battery life. While the original purpose of the light bar was for motion tracking, it was seldom used until PlayStation VR.

Other uses included representing your health, but players don’t actively see the light (unless you count a sliver on the touchpad in recent designs), so it’s largely a useless feature. If Sony does decide to keep this feature on the DualShock 5, they need to make it more useful, which would probably equivalate to better motion tracking.

7. Speaker and a Mic

The DualShock 4 has a speaker on it that has seen some clever usage during the PS4’s lifespan, but without the inclusion of a microphone, there’s not a lot to do with it. The headphone jack is nice, but most gamers will opt for a wireless headset at that point.

The addition of a microphone on the DualShock 5 would allow gamers to chat without a headset on if they prefer. It could also open up possibilities for voice-activated gameplay. Being able to issue commands to talk to characters through your controller would be a fun and immersive feature.

It may seem like I’ve been ragging on the DualShock 4 this entire time, but the truth is that I love the PS4’s controller. One thing Microsoft got right with Xbox One X was the compatibility with accessories. When I go to buy the PS5, I want to have the option for a second player (hopefully in co-op games).

That means I’ll need a second controller, which takes away from my game budget at launch. Instead of putting this kind of pressure on new buyers, why not just make the DualShock 4 compatible on the PS5?

Backwards compatibility in both the games and accessories would encourage more people to upgrade. It seems like a smart move, but what do you think? What features do you want from the DualShock 5?

Place your votes in our official poll, and let us know in the comments!