While the term “cyberpunk” may remind most people of the rocky launch of Cyberpunk 2077, other games have leveraged the sub-genre over the years to great effect. It goes beyond a style, however, and invokes a deeper look into futuristic societies and the things that can happen if we’re not careful to keep the powers that be in check.

One thing no one can fault FORECLOSED for is its style. The game oozes comic book cyberpunk style that’s immediately eye-catching. The premise too is interesting. You play as Evan Kapnos, who wakes up one morning to find out his company has gone bankrupt and as a result his entire identity has been, you guessed it, foreclosed.

While he starts out trying to do the right thing, Evan is quickly pulled into a conspiracy that has him on the run and dodging bullets very quickly into the story.

The story itself is solid, but not incredibly compelling. There are some moments of downtime where you can choose dialogue options, but the game goes through long stretches of fighting rooms of enemies between exposition, so it doesn’t quite have the narrative-focused feel the game’s official description would suggest.

One thing that’s really exciting in the opening hours of the game, are the ways that it transistions between comic book styled cutscenes and gameplay. For example, you’ll often see the screen split into panels before transitioning seamlessly into gameplay.

An early chase sequence also has you running from armed enemies through the perspective of security cameras, allowing for a visual treat beyond the standard third-person gameplay.

FORECLOSED is stylish, and it knows it. For a while, that was enough for me to look past some gameplay issues, but when we stop and break it all down, there are a number of problems with how the game plays.

For starters, there’s a sort of hacking minigame that involves pressing directional buttons in sequence. It works perfectly fine, but it never gets more complicated than that.

The same goes for these hidden switches you can find inside of walls using your vision, or ones that are scattered across an area. You’ll need to find and hack them all to move forward once the enemies are down They’re interesting at first, but soon become a repetitive aspect of progression.

Combat is a mixed bag as well. No matter how much I adjusted the aim sensitivity and aim assist in the options, I could never get the gunplay to feel responsive enough. It was always a little sluggish and difficult to make precise movements. More often than not, I would just resort to strafing to line up my shot.

Enemies also flood areas and just stand in place, which leads to simple shootouts. On the default difficulty, you’ll also find yourself going down in just a few shots, but thankfully the load times on PS5 were extremely fast.

Without a true cover system (you can crouch behind things but that’s about it), the combat can become frustrating when you’re fighting against the aiming sensitivity and trying to navigate numerous enemies are raining down ammo on you.

Things get more interesting when you factor in your abilities and the stealth mechanic. Using cybernetic implants, you can add some spice to combat with special abilities, my favorite of which is a telekinesis that lets you pick up and launch objects at enemies.

These add a much needed spice to the gameplay, but they’re not enough to fully overshadow the repetitive mechanics and simplistic enemy AI. Stealth is interesting, and the ability to see through walls with your vision is immensely helpful.

Taking out enemies involves overloading their brain implants by mashing the triangle button, which was a nice touch and another stylish take on a common mechanic.

It’s frustrating to see FORECLOSED nail the fundamentals so well and leverage an incredible style, but fall short of really moving the needle beyond the basics. Even with the simplistic gameplay, I would still recommend the game if they patched the aiming to feel more responsive or perhaps add more adjustment options.

While the game will always be very surface-level in terms of gameplay, this tweak to the controls would still make it an interesting cyberpunk romp, even if the story and gameplay fail to capitalize on their potential. 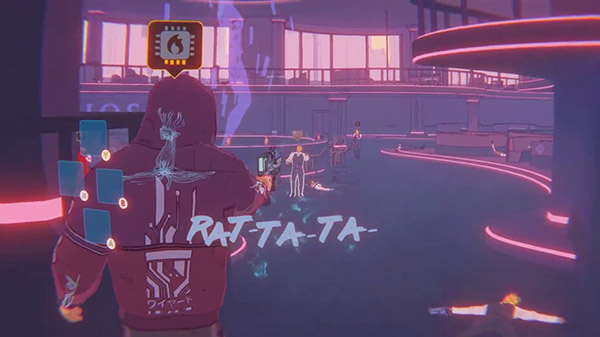 When it comes to a game’s style, I can forgive a portion of the gameplay if it’s joy to behold and experience visually. FORECLOSED has some of the best comic book inspired graphics I’ve ever seen, and it uses this style to incredible effect in the way it presents itself.

It’s a shame the gameplay can’t match that same level of polish, but if a patch irons out the wonky aiming, players could go into this expecting a light and simple, but utterly gorgeous, journey into a cyberpunk world.