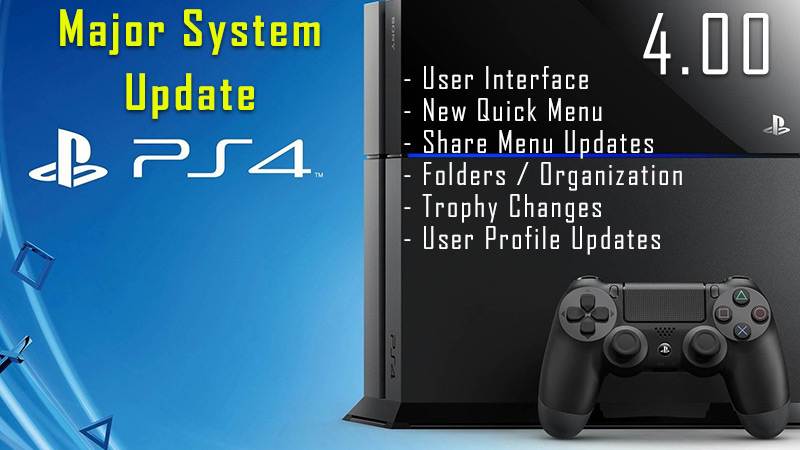 Sony has been teasing the big 4.00 firmware update for the PS4 and now that have information on what it will add to the current PlayStation experience, it’s clear to see that the PS4 and the upcoming PS4 Neo are here to stay. The PlayStation 5 may still be a few years off, but this update showcases a renewed interest in refreshing and redesigning the PS4’s features, and that’s fine with us.

Today we’ll look at the features coming in the 4.00 update and how they signal a reboot of the PS4’s cycle in the wake of the Slim and Pro models that are on the horizon.

PS4’s upcoming update is codenamed Shingen, according to the PlayStation Blog. Users who signed up for the beta will get a taste of the new features, but let’s take a look at everything that’s coming in this new update:

The term “refresh” is used in gaming when a new model comes out or an update overhauls the current standards to set a new precedent for the future. It all starts with new system backgrounds and a redone “What’s New” tab on the main menu. The system icons and the popup notifications have also seen changes.

It’s supposed to be similar to the look and feel of the original design, but it should be a little easier to use.

Normally when you hold the PS button on the DualShock 4, you get a quick menu that covers the whole screen. Not so, with this new update. Now you’ll still be able to see most of the screen, thus removing the need to leave your game entirely. With this new quick menu, you can see which friends are online, access your party, and you’ll have the ability to customize what it shows.

The Share Menu has also seen some love. It will now only cover a portion of the screen and save the last network you shared a screenshot or video to. In addition, video clips can be uploaded up to 140 seconds in length on Twitter (it was previously 10 seconds).

A huge request people have been asking for, myself included, are folders to organize your content on the PS4. This update wil allow you to group games and apps together for quick and easy navigation. The library has been given a separate section for purchased titles and one for content you have installed. You can also search for items in your library as well and choose from sorting options.

You’ll be able to view you trophies offline in this new update, and you can also see the contents of hidden trophies. The rarity level of trophies will also be represented with a pyramid icon that fills and shows ultra-rate trophies at the top.

The user profile will now allow you to compare your trophies to another player in the same screen. You can add a background image to your own profile as well which gives you the ability to customize it further.

As you can see, there are a lot of big changes and several smaller ones coming to the PS4 with this new update. How does this translate to the PS5? It’s time to find out!

Microsoft Blazes a New Trail With Scorpio, but is it a Dead End?

What’s interesting about this entire situation is how vastly different the two major gaming companies are handling the future. On the one hand, you have Microsoft who is going full steam ahead with Project Scorpio. On the other hand, you have Sony who is releasing what they describe as a “high-end PS4” and otherwise staying steadfast in their ways.

This update log shows that Sony is still heavily invested in this current generation. Meanwhile, Microsoft is breaking down the concept of generations altogether. It’s a lot to take in, so let’s look at both sides of the equation:

Let’s start with the competition, shall we? Microsoft’s announcement of not one, but two consoles at E3 2016 was slightly expected, but the implications of such a strategy weren’t apparent until now. Microsoft has gone all in with Project Scorpio, which is promised to be the most powerful console ever built.

Now Microsoft is saying that Project Scorpio will introduce a future where console generations are a thing of the past. They call it the Xbox Family, and all the current Xbox models are invited, along with Scorpio. All of your games will work on the new system. As Microsoft puts it, no one gets left behind.

Steps like the Play Anywhere program, which allows gamers to purchase a game once and play it across Xbox and PC, are blurring the line between consoles and PCs. After E3 2016, Endgadget spoke with Microsoft’s own Aaron Greenberg and asked the big questions about Microsoft’s future.

During the interview, Greenberg reiterated that Scorpio won’t have any console exclusive titles, but the VR titles it supports will be exclusive to the platform. He said that the thought process behind Scorpio was to innovate in the hardware space without sacrificing compatibility. They wanted gamers to know that everything they invested in with Xbox One and Xbox One S will go with them to Scorpio.

Here’s what Greenberg had to say about this radical change:

“I think it is. … For us, we think the future is without console generations; we think that the ability to build a library, a community, to be able to iterate with the hardware — we’re making a pretty big bet on that with Project Scorpio. We’re basically saying, “This isn’t a new generation; everything you have continues forward and it works. We think of this as a family of devices.”

So this is how they want to see the future, but as he said, it’s a “bet.” Gamers are going to love the compatiblity, but how mcuh can you really innovate in the hardware department when you’re always trying to make sure no one gets left behind? Will Scorpio really offer the graphical and performance leap we expect from new hardware?

“But we’ll see. We’re going to learn from this, we’re going to see how that goes. So far I’d say, based on the reaction, there appears to be a lot of demand and interest around Project Scorpio, and we think it’s going to be a pretty big success. If the games and the content deliver, which I think they will do, I think it will change the way we think about the future of console gaming.”

Microsoft is dealing in a lot of “ifs” here, but with Sony’s massive lead, it makes sense that they’re trying to think outside the box. Following Scorpio, Microsoft will probably have a rhythm of hardware releases similar to what we’ve seen with smartphones. It won’t be seven or eight years before we see a new Xbox added to this “Family.” More like two or three.

Now let’s take a look at Sony and what this new PS4 update means for them.

Sony Stays True to Their Roots, PS5 is Still a Ways Off

Sony is on a different timetable than Microsoft. With the PS4 Neo confirmed, but still a mystery, we know that Sony is trying to offer gamers a reason to stick around with consoles instead of jumping ship to PC midway through the generation. The PS4 Neo does not signal a new cadence of generations, nor does it surpass the PS4. It is meant to act as a “high-end PS4” option that gamers who want the best of the best can choose from.

When speaking with The Guardian, PlayStation boss Andrew House said that Sony was waiting to showcase the PS4 Neo when they had a range of experiences to prove that gamers needed this.

House was surprised that Microsoft took the approach of announcing Project Scorpio a year early. He made a good point in saying that the smartphone industry has created a culture of instant gratification. When you announce something, they want to see it and they want to know when they can have it.

House said they received some backlash when they teased the PS4 in 2013 and gamers were asking to see the box and were outraged it wasn’t available to see. When asked about Neo’s place among the PS4 models, House had this to say:

“I don’t think we’re suggesting with Neo, the conventional console lifecycle is over – I’m certainly not making that statement,” he said. “This is an additional option, it’s a high-end version of a PlayStation 4, let’s be very clear about that, rather than a generational shift.”

He went on to say that PS4 Neo was inspired by the smartphone industry, but Sony doesn’t want to bring the console cycle down to eighteen months as that would remove the “wow” factor you get when you jump generations. As a result of this, Sony comes across as more attuned to the gamer’s mindset.

In contrast, Microsoft’s approach is smart in the sense that gamers do love compatibility, but it doesn’t quite match up with the common gamer’s thinking in terms of generational cycles. Scorpio needs to wow gamers if it’s going to break the mold. Meanwhile, Sony’s upcoming PS4 Neo is sounding like a home run if the price is right.

Either way, it’s clear that Sony is here to stay with this generation. An update as large as PS4’s 4.00 firmware upgrade shows an investment into the platform that results in several more years of focus and support. PS5 won’t be here before Scorpio, but it sounds like Sony is going to fill the gap just fine with PS4 Neo.

What do you think about this new console changes? Are you picking up PS4 Neo? Let us know in the comments!