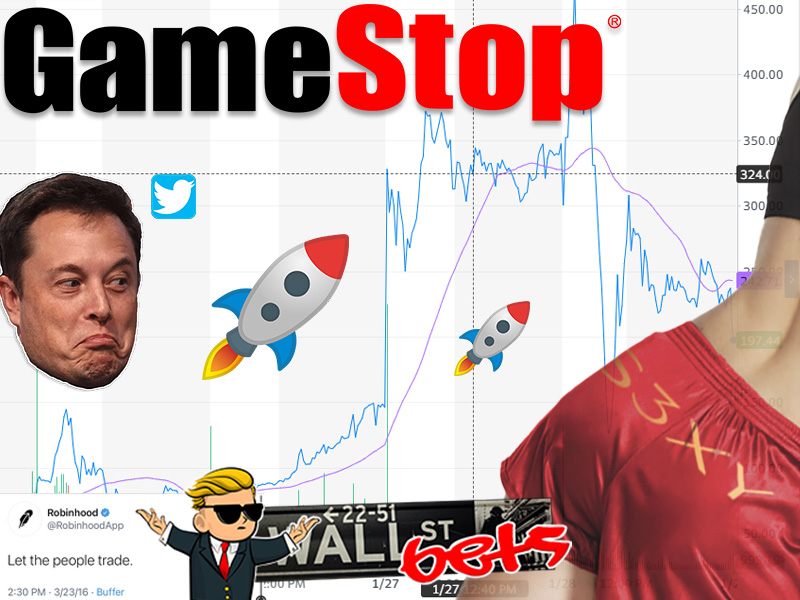 It’s not often that we cover the stock market here on PS5 Gamers, but when it’s this big, and of all companies, GameStop is involved, I just have to throw in my two cents. I mean, I did work at GameStop for almost a decade, so it’s only fair that I report on yet another news story that somehow manages to include them.

Reddit’s r/wallstreetbets subreddit has been at war with Wall Street over what began as a self-proclaimed “meme stock,” which let’s be honest, is all the value a share of GameStop had a few weeks ago. Well, now the battle has gotten way bigger than I think anyone anticipated. Not only that, but we’re bringing other dying stocks like AMC into the fold to join in on the fun. There’s a lot of money at stake here (won’t someone please think of the hedge funds!), but what’s really going on? I took a course in stock market jargon so you don’t have to, so let’s find out!

An Overview of the GameStop Stock Bonanza

Among the explanations about shorts and squeezes, and other terms you wouldn’t expect to be associated with the stock market, I came across this surprisingly easy to follow explanation, courtesy of @notasdfghjklx (trying saying that five times fast):

The stock market has always been a playground for the rich, so there’s something vindicating about average people coming together to drive up the stock prices and hopefully make some money for themselves. Where people cry foul here is that the hedge funds who shorted the trades are now forced to buy back all the stock they bet on, and lose ludicrous amounts of money because never in a million years did they expect it to go this high.

If things had gone in the hedge funds’ favor, the stock would have gone down in price, and they would have bough back the stocks at a savings, keeping the profits for themselves. Shorting stocks is risky though, because if, for some unforeseen reason the stock goes up in price, you can lose a lot of money. In this case, billions.

The term “squeeze” that we’re hearing a lot has to do with people driving up the price of the stock, knowing that there’s timeline for the investors to pay back the short. These types of cat and mouse games usually just happen between billionaires, but in the case of GameStop, a bunch of online redditors who trade for various reasons decided to rally together for this cause.

Access to apps like Robinhood and E-Trade make getting into the stock market easier than ever. Don’t worry, we’ll get to Robinhood’s fiasco in a moment. While some people are just buying share on their own, the true rub here are the people who are placing their own options, betting on the opposite side of the shorts. This creates a need for brokers to secure shares in the event that the trader wants to exercise them, which means they have to buy shares regardless of the price.

All of this is feeding into itself, creating the skyrocketing demand (and share price) of GameStop’s stock.

Understood. Just One Question: Why GameStop of all places?

There are several reasons that range from memes, to your typical Redditor, to the hedge fund shorting GameStop in the first place, Melvin Capital. GameStop has been tanking for some time, but it received a mild boost when the founder of Chewy.com bought a stake in the company and also joined the board.

If I’m exercising my mild understanding of people and stocks, I would also wager that GameStop was targeted due to being a company on the out, and one that most people in the internet, gamer, and meme culture are not a big fan of. Targeting them, a hedge fund, and wall street as a whole seems like a powerful trifecta, and one that would certainly qualify as a “meme stock.”

Bringing us up to the present (January 28th, 2021), Robinhood also made headlines when they decided to restrict activity on GameStop and other stocks that people had begun latching onto, such as AMC, Blackberry and American Airlines, all of whom are struggling with the pandemic or otherwise had low stock values. Robinhood’s blatant manipulation of the markets caught a ton of attention on social media, with government officials even weighing on on the situation.

Meanwhile, Melvin Capital required a $2.75 billion cash injection because of the squeeze, which got them out of their short position. The story continues to develop though, and it will be interesting to see how far this goes, and what will be done to prevent it from happening in the future by regulatory commissions.

As of January 29th, 2021, GameStop stock jumped over 100% again after dipping immensely the day before. It’s certainly a roller coaster, and both Congress and the Securities and Exchange Commission have issued statements on their intentions to look further into the situation. The SEC also said it will protect retail investors, so we could see apps like Robinhood punished severely for manipulating the market.

Meanwhile, even Elon Musk is weghing in on the proceedings. His tweet, consisting of one word, led more and more people to the subreddit that’s fueling the proceedings:

And now, for the part you’ve all been waiting for!

What Does This Have to Do With PS5?

I’ll be honest with you, the answer is: not much. That being said, I am a simple man: I see GameStop, I write about it. My mixed feelings about the company compels me to chronicle their spectacular impacts in the news, if only to throw in my two cents.

As a gamer who doesn’t do much trading, my opinion here may not hold a ton of water, but I would follow the advice of those who recommend staying out of this one and just enjoying the show. There’s too much at stake, and too many people will lose money they can’t afford to lose. Keep your cash and spend it on a PS5. Hey, maybe that’s the connection?

How do you see this ending? Does this blatant example of the complete volatility of the stock market terrify you? What exactly is the point of the stock market anyway? These questions and more could be answered as the story develops. Stay tuned and let us know what you think in the comments!