The World of Darkness tabletop RPG, like many others, is packed full of lore and interesting mechanics that are ripe for a video game adaptation. With Werewolves and vampires abound, among other things that go bump in the night, it’s surprising we haven’t seen more games in this universe.

While Vampire: The Masquerade Bloodlines is a classic finally getting a sequel, in Werewolf: The Apocalypse – Earthblood, the wolves are finally getting some of the limelight. Developed by Cyanide Studios, the developer has a history of being faithful to their source material, but have they managed to reach the ambitious goals set forth by this title, or does this wolf’s teeth feel more dull than they should. Let’s find out.

Werewolf: The Apocalypse – Earthblood makes a very strong first impression. The opening CGI cutscene and introduction to the game’s world has a big budget feel with some truly excellent art direction.

In this world, Gaia (Mother Earth) is dying. There are three primal forces that have been influencing the world since the dawn of time: the Wyld, the Weaver, and the Wyrm. As you can imagine, the Wyld encompasses natural things, while the Weaver encompasses humanity’s technologies, science, and industry.

The Wyrm is the one you need to be worried about. In Werewolf: The Apocalypse – Earthblood, it is the Wyrm that has infiltrated and corrupted a corporation called Endron that is one of the greatest threats against Gaia and nature itself.

The story quickly brings things down to Earth (pun intended), choosing to focus on a Garou (werewolf) named Cahal and his Fianna tribe in the pacific northwest.

The game wastes no time setting up Cahal’s exile, which is a result of him losing control in the opening mission. As a result, he distances himself from his daughter and only returns five years later when he gets word that Endron is planning to attack his old tribe.

With this setup, Werewolf: The Apocalypse – Earthblood walks the line between what is clearly a global threat, and the more focused story of Cahal trying to reconnect with his daughter and save his tribe.

It’s a good setup, and one that had me interested from the very beginning. As time goes on, however, the story keeps hinting at greater things on the horizon, only to let you down again and again.

For example, you spend a vast majority of the game in the Fianna Tribe’s territory, which acts as a decently sized hub world protected by a forest spirit that guides the tribe. You do eventually get to interact with another tribe, and while things do get interesting, it’s over far too soon, and other tribes are left off the table entirely.

Similarly, Endron as a corporation receives very little development beyond them being the obvious bad guys. The company CEO is especially an underdeveloped villain. Another villain of the early game who wreaks havoc in her exosuit, is more interesting, but again, doesn’t really receive any development.

Cahal and his tribe are better, but not by much. The game offers things like branching dialogue and unlockable responses, but these are used sparingly. Collectible documents offer some additional insight into characters like Ava and Cahal’s daughter, but it’s mostly business as usual between everyone for the vast majority of the game.

Voice acting is hit and miss, especially in the early hours, which takes most of the emotion out of certain scenes. It did improve as time goes on, but with the story so quick to rush from plot point to plot point, I never really got attached to the characters.

Multiple endings do branch from a late game decision, but if you reload your save you can’t see the other ending without restarting the level.

It’s difficult, because there’s truly some thought and care put into how the world is framed. Cyanide Studios also did a Call of Cthulhu game that I also enjoyed, but suffered from the same issues. This studio is excellent at adapting existing worlds and lore, but often fails to capitalize on the potential of the source material, leaving the story to feel far too surface level when it could have been so much more.

For example, incorporating more tribes, offering more insight into how the Wyrm infiltrated Endron, and even seeking to make the villain more than just a stereotypical CEO would have gone a long way towards fleshing out the experience, which clocks in anywhere from 6 to 10 hours.

Side quests are available, but there are only a couple in the whole game and they don’t add much to the story in the way they could have.

In the end, it feels like Cahal’s story could and should have had a lot more meat on its bones. It was compelling enough to keep me playing, but left me feeling unsatisfied when the credits rolled. I kept going in the hopes that things would slow down, open up, or at least offer more depth, but those things never came. Shifting our focus to gameplay, Werewolf: The Apocalypse – Earthblood is a combination of stealth, action and RPG elements, all of which remain surface level throughout the adventure.

You can switch between two of your forms, Homid (Human) and Lupus (normal wolf) at will. The human form is the one who can do stealth takedowns, sabatoge enemy gates, and fire a crossbow to take out targets from afar.

The Lupus form is good for sneaking around and becomes more viable when you purchase a skill to make you harder to detect. Despite this, I did have a couple instances where enemies could see me through a solid wall, but it wasn’t too often.

The third form, Crinos, is the true werewolf form you’re all here for. This form can be triggered at any time when you’re around enemies and stays on until you finish killing everyone in the immediate vicinity.

While in this form, you have access to two stances, one of which is agile and fast, while the other is slow and does more damage. Each of these have special skills you can unlock and use via a rage bar beneath your health. The ability to spend mana to immediately regenerate health is a particularly helpful skill.

So, right now you’re probably wondering why stealth is even needed if you can go full wolf at any time. There’s a couple reasons for this. For starters, being stealthy and using items like flasks allow you to build up rage prior to transformation, thereby increasing the pool you have to work with when the fighting starts. This is very helpful in later fights with a lot of enemies on screen.

The fighting itself, while full of action, destruction, and tons of blood, does get repetitive pretty quickly. Your set of skills does receive some new additions as you level up and gain spirit points to spend in the admittedly small skill tree (compared to most RPGs).

Exploration allows you to find various plants that boost your spirit points, but even with more skills to choose from and gameplay modifications, the combat really boils down to just clawing through everything in whatever fashion you desire.

During combat, you also build up fury which is a separate meter. This allows you go into a berserk mode and utilize both stances simultaneously. The downside is that you can use any skills or heal until the fury has worn off.

On their own, these mechanics are a solid foundation, but they don’t carry an entire game. Specifically, the rage feels like it should have been something that you don’t want to fill up (lest you transform at a bad time). This would have played well with the story about Cahal’s self-imposed exile.

I’ve also heard that the fury used in the game is something to be used sparingly and is even frowned upon because it can encourage corruption by the Wyrm in the larger World of Darkness lore. Visually, it seems like Cahal is giving into the Wyrm when he uses this ability, but it’s never addressed in the story.

Similarly, enemies always come out of the same orange doors (which can be sabatoged in stealth prior to combat and damages the enemies when they emerge). The layout of the rooms changes of course, but the actual look and feel is largely the same.

Enemies receive some much needed variety in the second half of the game, and while a mid-game prison mission mixes up the mission structure, nothing really changes over the course of the adventure, save for some new skills when you level up.

The stealth is also under baked to the point where I felt like a lot of rooms were just about me thinning the herd and sabatoging doors or disabling turrets until I had to fight the rest. With the combat’s repetitive nature setting in, I actually enjoyed opportunities to opt for stealth when I could.

The problem is that stealth doesn’t allow you to move enemy bodies, and with takedowns and your crossbow as your only options, there’s not a lot of options for how you approach situations.

Despite all of these things, I did enjoy my time with Werewolf: The Apocalypse – Earthblood. There are bright spots to be found in what does work about the story, and while the combat wears thin, it’s certainly exciting in short bursts. The stealth, even if it’s incredibly simple, throws in some flavor to the encounters as well.

The problem is that all of it feels like it was supposed to be so much deeper. More skills, a third stance in combat, actual combos, more enemy types, and even more interesting and engaging boss fights would have all helped immensely.

There’s potential for a truly great World of Darkness RPG here focused on the Garou, but Werewolf: The Apocalypse – Earthblood stops short of realizing its potential in almost every respect. 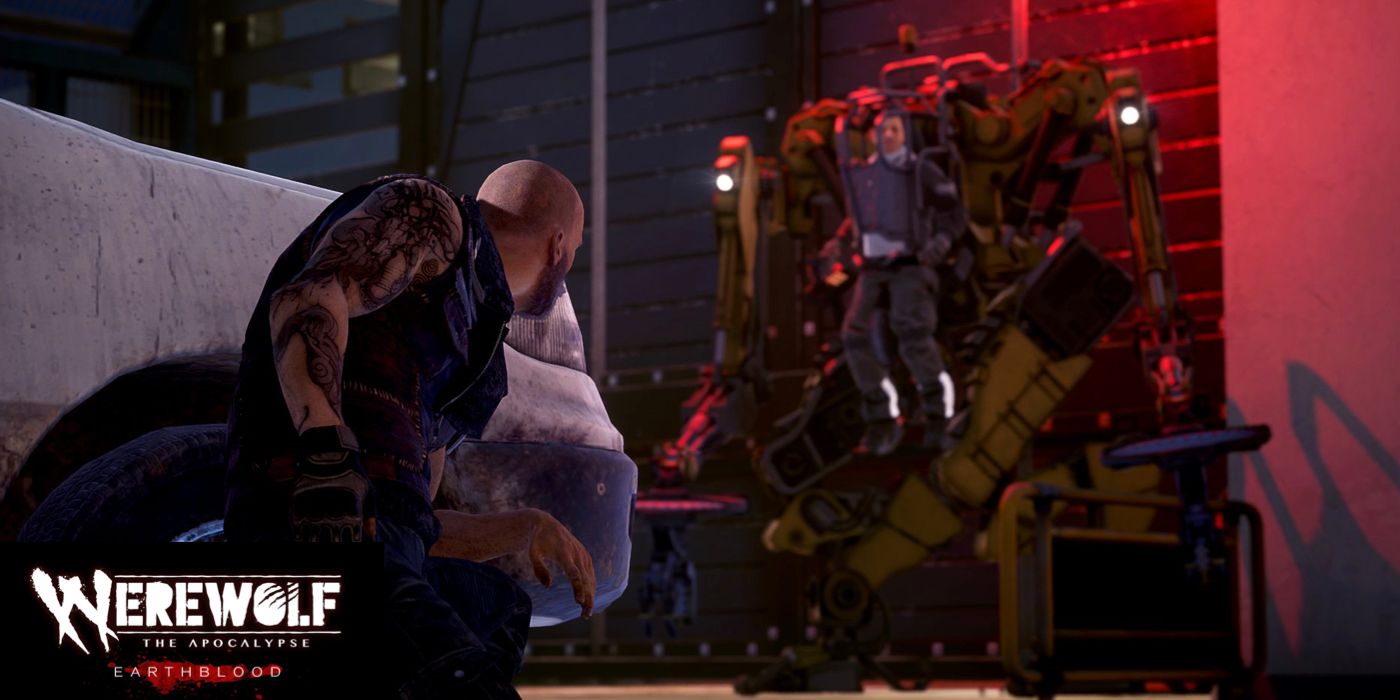 Playing Werewolf: The Apocalypse – Earthblood on PS5 is a mixed bag from a graphical standpoint, but the performance itself is absolutely rock-solid 60FPS, even during the more chaotic fights with numerous enemies on screen and blood flying everywhere.

The DualSense integration is minimal, but baring one crash I had near the end, the game was quite polished from a performance standpoint. Graphically, the game has bright spots like the superb animation as you transform from one form to the next, but suffers from the repetitive environments and truly dated looking character models (especially when the camera gets close).

The soundtrack may not work for everyone, but I love a good metal / rock track. The main menu and credit’s song is particularly excellent. It doesn’t make a huge impact on the gameplay, but it fits the action on screen well enough for me to enjoy it.

Coming down to the wire here, Werewolf: The Apocalypse – Earthblood is a game that I’m certainly glad I played. It made me want to hunt down the other games in this universe and perhaps even try the tabletop.

As a game, it has a solid foundation but leaves far too much potential on the cutting room floor to justify the near full-price point. It’s not broken, and it’s not necessarily a bad game, but what really hurts is that it could have been so much more.