Racing games are typically an exciting combination of speed and competition, and some of them feature track builders for those who want to practice their hand at crafting the course itself. What if I told you that there’s a game that combines both of these, in real-time, that also hilariously references Jan de Bont’s Speed films, starring Keanu Reeves and Sandra Bullock?

Welcome to Can’t Drive This, the PS5 game where one person builds the track while the other one drives. Oh, and the other big twist? If you slow down for too long, you’ll blow up. The need for speed is real here, but does Can’t Drive This capitalize on its premise, or will you be hitting the brakes before long? Let’s find out.

A Compelling Premise That Burns Out Too Soon

Can’t Drive This is one of those games that resulted a double-take and a wry grin from me as soon as I read the premise. A cooperative title where one person builds the track and the other drives on it in real time? Sounds like good old fashioned chaos, and I am here for it.

The game’s tutorial is also hilarious and very self-referential. The references to the film Speed are also the inspiration for my own nod to the classic piece of cinema in my review here. The game even gives you a pat on the back for watching all of the tutorials, which I particularly enjoyed as someone who enjoys fun tutorials, which is realize is an oxymoron to some gamers out there who’d prefer to just get into it.

Can’t Drive This is a game that expects you to play with others, but it does include a “lone racer” mode that allows you to swap between building and driving. The option is appreciated, but it pales in comparison to the other modes. A full single player mode would have been great, but in lieu of this I would have rather seen another multiplayer mode instead.

Moving to the main focus, you can play Can’t Drive This in both local and online co-op. The former is up to four players, while the latter is limited to two. This simple fact also locks out one of the modes, Capture the Egg, which you can only play with four players locally. This mode is essentially capture the flag, but with a giant concrete egg as the game describes it.

Where Can’t Drive This capitalizes on its premise is the Yardage and Game of Drones modes, both of which focus on the building and driving mechanics. Yardage is the core experience, challenging you to drive as long and as far as you can without slowing down and exploding, or falling off the track and exploding.

Game of Drones divides things into stages, requiring your partner to build the track towards “holos” you need to collect. The drones in this mode also drop EMPs onto the track, which will stop you long enough to trigger an explosion. These two modes were my preferred ones to play, and while they made for short bursts of fun, the game’s current offerings end there.

Progression does happen in the form of an “unlock-o-meter” that moves upward based on your progress and various stunts or close calls you perform. These unlock cosmetics for both your vehicle and for the road itself, which are fun, but not a huge incentive to play for long periods of time.

While the selection of modes is fairly bare bones, and the single player is nearly non-existent, special attention should be paid to the quality of the track pieces, which come up at a random as one of the player is throwing them down in real-time.

Pieces of track with things like mud and water will mess with your traction and vision respecitvely, while perfect moments like laying down a ramp and flying through a flaming hoop add some excitement to the twists and turns that the builder sets down.

The random nature of everything keeps you on your toes, and there’s quite a challenge in setting up a track that a player can navigate. It’s very easy to accidentally block their path or misjudge the path they are taking and send them flying off the edge.

The core concept is sound, but the lack of modes or any substantial progression makes it a little hard to emphatically recommend Can’t Drive This at its full price point. Some additional updates that add a little more substance to the experience would go a long way here.

DualSense Features Round out a Solid Presentation 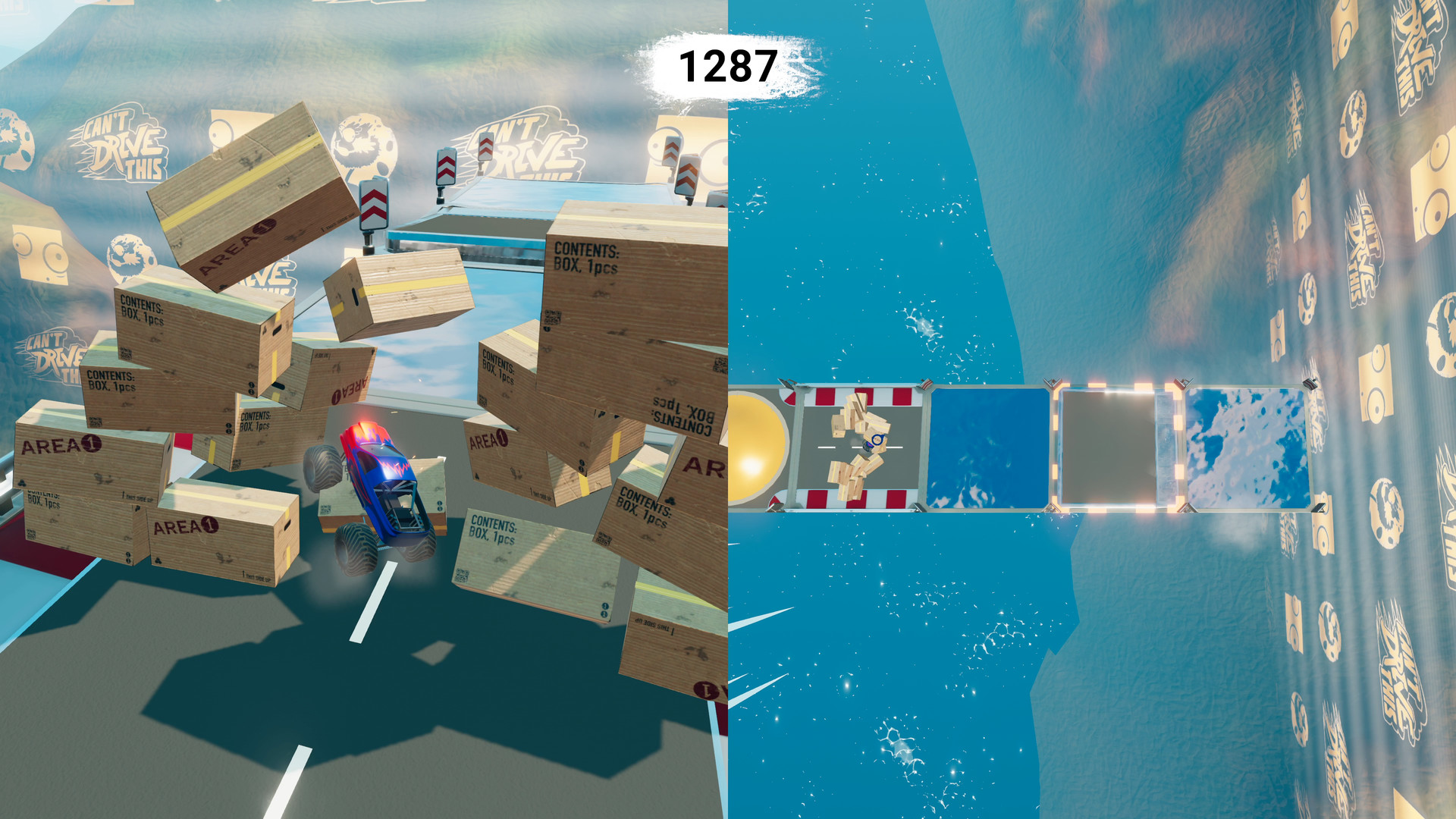 As a big fan of the unique features on the DualSense controller, I really enjoyed the PS5-specific features that Can’t Drive This offers. Punchy feedback from the haptics in the controller are used to great effect, but it’s perhaps the adaptive triggers that steal the show here. Driving a hulking monster truck of a vehicle is conveyed well through the higher resistance on the triggers, which made it very fun to barrel through the courses without ever touching the brakes.

Can’t Drive This proves that a great idea can (almost) carry an entire game. While it’s price tag warrants a little more than the handful of modes and customization unlocks it provides, there’s certainly fun and value to be had in the superb chaos of trying to drive a race track while it’s being built. That alone makes it a fun game to play in short bursts.