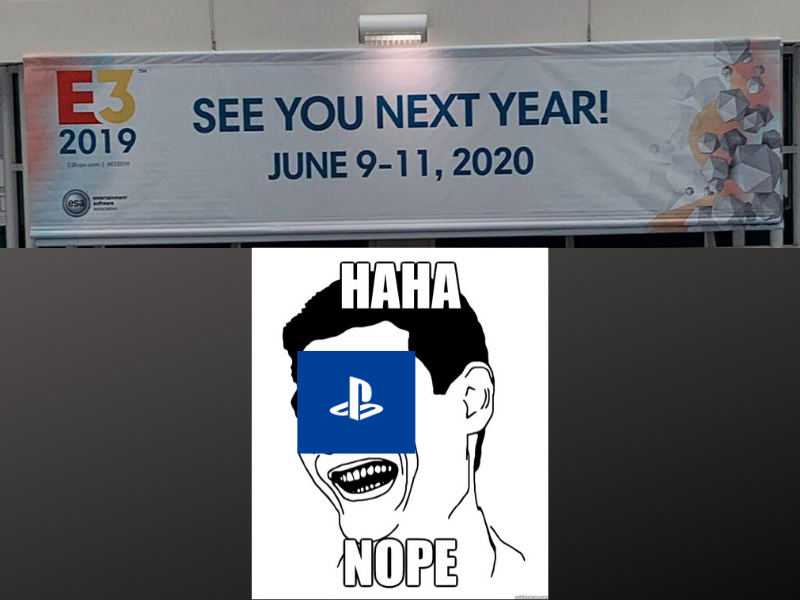 When Sony revealed they were skipping out on E3 2019, I was shocked and hurt. I love E3, despite the fact that it’s been in decline over the years. That doesn’t change the fact that it’s a national holiday in my household. Unfortunately, Sony isn’t coming back for 2020.

The official announcement comes in the opening weeks of 2020 as Sony confirms it will not be attendance at E3 2020. Among this, talk about a potential reveal at a PlayStation Meeting 2020 has resurfaced as it looks more likely than ever. All of this, and a new tease from Sony’s own Jim Ryan. Let’s dive in!

Sony Skipping E3 2019 made us all feel like it was a result of them not having any PS5 stuff to show, but that’s clearly not the case this year. After all, the PS5 is confirmed for holiday 2020. So, why would they skip E3 again in 2020?

In a statement provided to Gamesindustry.biz, they had this to say:

“After thorough evaluation SIE has decided not to participate in E3 2020. We have great respect for the ESA as an organization, but we do not feel the vision of E3 2020 is the right venue for what we are focused on this year.

We will build upon our global events strategy in 2020 by participating in hundreds of consumer events across the globe. Our focus is on making sure fans feel part of the PlayStation family and have access to play their favorite content. We have a fantastic line up of titles coming to PlayStation 4, and with the upcoming launch of PlayStation 5, we are truly looking forward to a year of celebration with our fans.”

As the article notes, Sony announced the original PlayStation at E3 in 1995, and we all remember the absolute thrashing they gave Microsoft at E3 2013. It seemed like E3 was always going to be a tradition for this kind of big hype, but Sony seems to prefer doing their own thing.

The ESA, who organizes E3, responded with a statement of expected optimism about the show, but without one of the big three in attendance, it just feels like a hollow attempt to hype up an empty show (Microsoft notwithstanding).

With E3 2020 out of the running, where and when will we see the PS5’s official reveal? There are a few options.

PlayStation Meeting 2020: When and Where?

The PS4 and PS4 Pro were both revealed at specific Sony events. So, it’s safe to assume that will be the case again with this generation. Back in August of 2019, we reported on a rumor that Sony would have a PlayStation Meeting on February 12, 2020.

To me, this is the most plausible approach, especially now that they’ve decided to exit E3 2020. It’s also worth mentioning that Sony is holding an Experience PlayStation event in their Sony Square NYC space from January 14th-16th of 2020, but I don’t think we will see any surprise PS5 news from this event.

No, I’m banking on a February reveal. While we wait, why not have another serving of gloriously spicy hype? At the turn of the year, PlayStation CEO Jim Ryan sat down with Business Insider Japan. He offered up a juicy quote to get the old brain juices flowing:

“With every new console, the processor and graphics get better, which is, of course, compelling, but we need to have unique elements too…”

He went on to say that many of these “unique elements” have yet to be announced. This is interesting, given how much has been said of the new controller and SSD drive. I’m all for more surprises, though. Maybe we’ll find out sooner rather than later?

Let us know what you think about a potential February 2020 reveal. Also, if your hearts hurt like mine knowing Sony won’t be at E3 2020.